What is the best music to listen to while smoking your hookah? How do you set the mood while lighting up your hubble-bubble and shisha? The answers you’re looking for won’t elude you much longer… check out our 5 Best Albums to Listen to While Smoking the Hubble-Bubble: 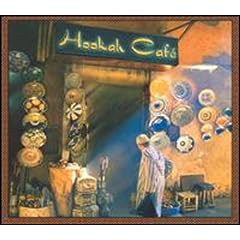 “Want to hear exotic music from Marrakech, Istanbul and Cairo? Then this CD might be up your alley. It delivers a good mix of dufferent styles and artists from Africa, the Middle East and India that everyone can enjoy, even if you aren’t particularly knowledgable about it. On this CD you get skillful ‘ud playing from the Nubian Hamza el-Din, haunting melismatic vocals by Azam Ali of Vas and Indian singer Najma, a New Age duet with belly dance master Hossam Ramzy and Phil Thornton, Palestinean dance music from Simon Shaheen, Jewish ethno-techno from Zohar, Greek pop music from Kristi Stassinopoulou, ambient Moroccan trance music and so much more. This isn’t neccessarily traditional music, nor is it some sort of in-depth look at Middle Eastern music, but its good listening. And besides, how often do you get to hear Palestinean, Sudanese, Moroccan, Indian, Persian, Israeli and Greek music side-by-side? Think of it more as a journey of the mind. In that regard, its a great compilation, and well worth the purchase.”
2. Putumayo Presents: Greek Music“>Putumayo Presents: Greece
Greece“> “The reviewer from Amazon seemed to complain that this CD isn’t a great “party mix.” Depends on what kind of party you’re throwing, I guess. I think this would be a great CD for an evening get-together with friends who are “ethnically” inclined. It’s not dance music, but it provides some great ambience. It’s also great music to sit down and actually pay a lot of attention to. Shocking, I know! Some of the lyrics and melodies are incredibly beautiful, and instantly bring to mind both the spectacular Grecian landscape and the passion and hardships rooted in a people who struggled for so long under oppresive regimes.

Sure, there are some bouzoukis… but trust me, they’re not as dorky as they usually are. This is a cool CD. Don’t pass it up.” “If the Meditarranean Sea or any of its countries ever captured your imagiantion: you will love this CD. It contains many selections of top musical artists in countries which border on the Mediterranean. The whole CD has creative, talented musicians and singers who stretch their art to limits of traditional sounds – much of it is modern but the roots of tradition, be it ancient instruments, rhythms, or snatches of melodies, are true to the country of origin. My favorite is Greek: this CD is the first on which I heard George Dalaras and Glykeria, platinum and gold sellers in Greece. I would not select Italian, French, or Spanish music on my own but on this CD I love it!!! The blend of sounds from one track to the next builds into a crescendo of eversecence that must be heard to be appreciated. Truly a masterpiece – Putamayo knows how to do it right!” “Every single track on this CD is a unique and beautiful expression of modern Greek music: ethereal soulful vocals, traditional instruments and rhythms which evoke resonant vibrations (whether or not you speak or understand any Greek). Melina Kana, Savina Yannatou, Haris Alexiou, and Yiota Vei each demonstrate their charm & personality via vocals that arise from very deep musical roots … “Smerneiko Minore” by Savina Yannatou is especially a fine example of a modern singer expressing passionate feelings through a veil of ancient instruments played by modern musicians. Past or present, doesn’t matter: the music, the meter, the instruments, the rhythms all universally appealing. Yiota Vei has an unforgettable controlled soprano voice full of depth and hidden meaning. It is said she is “self-taught” and that makes her vocals even *more* authentic and real. George Dalaras needs no explanation – just about anything he sings is passionate and meaningful: sung personally to you (if you are female). I concur with Nick, where is Volume 2? Be sure it is Smerneika and Rembetika … please!!!” There are quite a few fascinating cuts on this CD, including some very rare music from Japanese musician Oki that highlight his Ainu heritage. The Ainu are the Japanese aborigines, living on the island and anthropologically quite different from the Asiatic strain of Japanese. It’s a very pretty folk song, and something you won’t find on a CD every day.My other favorite was the opening song by Zulya. She is a Tatar, that is, one of the Asiatic Russian peoples. What is interesting here is the mix of the Mali kora as an accompaniment. At first, I was a bit surprised to hear the kora (it’s not from Tatarstan–it’s an African instrument), but I must say it made for a lovely mix with the beautiful and mysterious-sounding song. The rest of the CD is pretty good, too, with especially nice music from Persia and Turkey.

If you ever brew a pot of tea, try serving it in those thin Turkish or Russian tea glasses instead of mugs on a cold winter day, and put on this CD. Lots of romantic atmosphere, and a great way to relax. Highly Recommended.