Go ahead, feel at home !Bring your hookah too.

These guys are NOT homeless. They found refuge last year in a Sukkah and even had the brains to bring in their Hukkah.

It was said to be a land inhabited by gigantic scorpions and great mountains. G-D leveled them to make safe passage for the Fleeing Children of Israel. They were bidden by G-D to build Sukkot,¬† a hut with organic roofs like palm branches, or from the Accacia Tree found in that area and live 7 days in this Sukkah-hut. The mystical teachings behind this represent the Divine Presence of G-D protecting them in this physical world. Also this shows that we say each year that we again admit that what we assume to belong to us physically in this mundane world is nothing more than a¬† soon- to- be -collaspable hut, and our only real “home” is belief in the Infinate Creator and His support to us in the physical-spiritual life as we now know it.

We are told to bring in beautiful untensils, rugs, beds or mattresses, and especially to decorate the organic roof of leaves or wood with home-made decorations which the children love to make, and examples of the new year harvest like ears of corn, wheat, fruit tied to the branches and hanging down, showing that even as we live in the short part-time physical realm, we all have Souls in Bodies and the Infinate One will help us if we make our belief grow contantly.

And I’m bring my hookah in too to enjoy¬† while I stay . For me its a 7 day holiday since I live in the Holy Land, and 8 days for the people dwelling outside the Land , who might not have heard the New Moon of this Tishrei month in the exact time because of distance.Not that they don’t have their own New Moon, since the Torah proclaims the world as round, not flat.But the New Moon was announced by 3 witnesses in Jerusalem. Of course, tonight will start the Holiday¬† of Sukkot (Pentacost) on its Full moon.

I better clean out my hookah!Here are a few photos of other Sukkot -huts being built or finished. In cities like¬† Tel-Aviv, Jerusalem or Brookly, New York you may see hundreds built on the sidewalks and especially verandas, since the Sukkah Hut must not be set up under the permanent roof or veranda of¬† anyone else. In Israel buildings are made so that this does not happen. Each must see the stars shining through the organic roof, showing G-D’s¬† Greatness and our proclimation that we humans are all a part of this well run Creation.

Travelling Sukkah, made to drive into the cities so that people can shake the “4 Kinds”¬†

and eat something with a Blessing¬† in the Sukkah. My son did¬† this one year in Thailand, another son in Russia, a third in Cyprus.Manhattan-you may find many of these.

on the balcony of every street home.

Very basically, the “4 kinds “are taken separately the willow branches (2) and the myrtle(3,5,7,9,11,13,15,17etc.) and tied organically usually with a palm leaf to show unity, and as a blessing is said in the Sukkah the Citron which grows all year is brought to touch them, showing G-D’s Unity and they are waved in 4 directions, then up, then down to show that the Infinate One Created this world and is King everywhere.The physical world, especially the vegetable kingdom is raised to a less physical realmas is all physical in this world, which gives a stronger ammount of G-D’s Infinate light a “cleaner window” to enter this world. 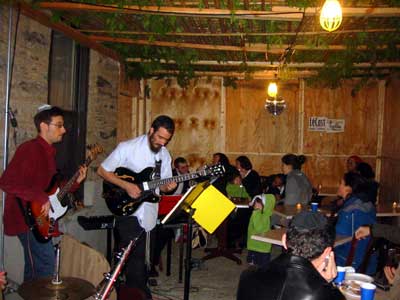 We are also bidden to sing, dance, eat and have wine, vodka, HOOKAH if you want, but to show our happiness and blesssings,.By dancing with others we show that we are united children with one basic Soul in the Infanate One poured into each person’s body. By dancing in the Sukkah we add even more unity and Joy to our Service all year round

3 thoughts on “Feel at Home”