Zachary Kleinhandler, a senior at Columbia College, does not smoke cigarettes. In fact, he thinks cigarette smoking is kind of a dirty habit. 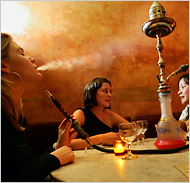 At the Casbah Rouge, a Moroccan restaurant a few blocks from Columbia University, from left, Jenna Crouch, Erica Carley and Marjorie Yang, all students at Barnard College, enjoying a jasmine-flavored bowl.

But every few nights, he and his friends share a hookah at the Casbah Rouge, a Moroccan restaurant a few blocks south of the campus, drawing in mellow-as-molasses flavored tobacco that bubbles through the water pipes and gives the air a fruity sweet scent.

“I came opening day last year, and I’ve been coming ever since,” said Mr. Kleinhandler, an American studies major. “I’m not addicted or anything. I always come with other people, and we smoke one hookah in an hour. It’s just a nice way to relax and be sociable.”

Hookah bars have been cropping up in Middle Eastern immigrant enclaves, like Little Egypt in Astoria, Queens, and have made inroads in chic downtown areas of many American cities. Now, college students are discovering their appeal.

A few decades ago, hookahs were seen as exotic delivery systems for marijuana and hashish, but these days students view them as almost virtuous (even if health officials disagree) because most students indulge only once or twice a week, always sharing and so inhaling less than they would with a full-fledged cigarette habit.

And if there is a whiff of illegality, it may come from running afoul of smoking bans in New York and many other cities. Tobacco is, after all, legal for college students who are at least 18.

Many middle-age former hippies ‚Äî and campus security officers ‚Äî wonder whether college students really see hookahs as a good smoke, or a smokescreen behind which to hide drug use. But today’s fresh-faced college students, even those who confess freely, if off the record, that they smoke marijuana, say they use hookahs for tobacco, not drugs.

And they say smoking in hookah cafes, at $5 to $25 a pipeful, is cheaper than bar-hopping and allows them to partake even midweek, with no drunkenness, no loss of inhibition, no hangover and no legal worries.

“You can come here even if you have a test the next morning,” said Elizabeth Yale, a Barnard College junior who was sharing a hookah with Mr. Kleinhandler’s group one night. “And you don’t get home feeling dirty, smelling of smoke and alcohol.”

Nationwide, 200 to 300 hookah bars have opened since 2000, according to Smokeshop Magazine, many near college campuses.

Near the University of Wisconsin’s Madison campus, hookah smokers were disappointed last summer when a smoking ban stopped the Casbah Bar and Lounge from offering hookahs indoors. Sales plummeted from about 300 hookahs a month to about 30, for outdoor customers.

“We’ve been experimenting with a nontobacco product, for $12, a mixture of hibiscus, eucalyptus and molasses,” said Sabi Atteyih, the owner. “Hookah cafes are an important cultural experience, a place where Muslims and Jews and Catholics and people of color can sit side by side, and share.”

But despite perceptions, hookah smoking is not healthy.

“Hookahs are not safe,” said Cathy Backinger, acting chief of the National Cancer Institute’s Tobacco Control Research Branch. “There are toxic compounds, including carbon monoxide. Hookahs also contain the tobacco-specific nitrosamines that are cancer-causing. Even though it’s coming through the water and feeling smoother, some studies show the levels of toxic compounds are at least as high, if not higher, than cigarettes.

“Another thing that’s different from cigarettes is the sharing. Where there’s sharing of a mouthpiece, there’s a risk of infection, and there are some documented cases of herpes.”

“Hookahs are still a relatively new phenomenon in this country, and a lot of young people think that because it feels smooth, there aren’t any adverse consequences,” she added. “But they’re wrong.”

Hookahs, also known as water pipes, narghile or hubble-bubble, use charcoal to heat shisha, tobacco that has been soaked in molasses or honey and mixed with fruit pulp and flavorings. Most hookah cafes offer dozens of flavors: apple, mint, peach, raspberry, mango, strawberry, jasmine, coconut, rose and more.

In many cities, the customers in hookah cafes are mainly Middle Eastern. And even in bars appealing to students, the feel is often more Middle Eastern than psychedelic.

Cafes are not the only place where college students use water pipes. At Yale, one of the fraternities, Alpha Epsilon Pi, has a hookah room that is for quiet socializing and relaxation ‚Äî and the calmest area during parties.

“We decided our top floor should be a place where you could get away from the loud music, meet new people, hang out and talk,” said Ian Bishop, a fraternity brother.

“We could pull out Taboo or Twister, but there’s something nice about sitting around a hookah, blowing smoke rings,” he added.

Jewish student organizations at many universities have sponsored “Hookah in the Sukkah” events during the annual Sukkot harvest festival. But since many college dorms prohibit both smoking and drug paraphernalia, on-campus hookahs can be a touchy business. Last month, the University of Oklahoma newspaper ran an article describing the tensions between campus hookah smokers and campus security.

Even off-campus, many hookah cafes run afoul of a new generation of smoking bans that have created skirmishes for hookah bars in many cities.

In New York City, the Smoke-Free Air Act that took effect in 2003 prohibited smoking in restaurants, and the city’s Department of Health and Mental Hygiene says hookah bars are not exempt from the law. The Health Department has cited some hookah cafes for smoking violations but has yet to close one.

Michel Feriani, the manager of the Casbah Rouge, is fully aware of the smoking ban but cannot bring himself to stop offering hookahs.