(okay, I made a review on this book in which their is a large chapter on hookah smoking by the Rich Sultans and in every day India society as well–see link above)

I do take credit for “finding” this original art print some years back in a portfolio of Occidental Middle-East art motif`s, and it naturally gets its way onto many other online hookah¬† blogs and sites!! Why not,¬† half the fun of smoking a hookah are the shisha tobacco¬† “PipeDreams”.

A cigar smoker might imagine himself as a suave businessMAN jet-setting accross the globe, a Briar Pipe smoker is either Hugh Hefner in his hea, or Grampa tamping down his wad while watching the Thanksgivingday Parade on TV.¬†

We hookah smokers are Sultans,Sheiks,Nomads of the desert.¬† (For me that’s not hard, as my Israeli village is in very close view of 5 Arab villages in on the other hills accross from us, and we hear the delightful call to prayers by the Muze’en 5 times a day. (Reminds us to pray our 3 times—though from a very young age I was educated to love the prayers and we didn’t have Minnarets nearby. Its just more exotic¬† atmosphere!¬† Maybe like a Little League baseball player imagining that he’s Derek Jeter stepping up to the plate.¬† Does Derek Jeter own a hookah? Anyone know?¬† He went to the same High School that my American cousins did in Michigan . Well my cousins had to finish school and Derek Jeter’s parents are both educators, besides, no

I even send him my cast offs :

with his schedule playing everyday for 10 months, who has time to find the best?

But Derek decided he’s just “one of the boys” at heart and has a new realtionship with this guy here, some soccer-football player from¬† out in Europe. Anyone know who he is and if he smokes hookah? (Okay, I’ve seen David Beckham play quite a lot only jiving).

Should someone buy a pink bat for Derek?

Alex Rodriguez is “smart” either he has something to catch or pass on besides a baseball, or he’s worried that David has (he won’t touch him without his gloves). 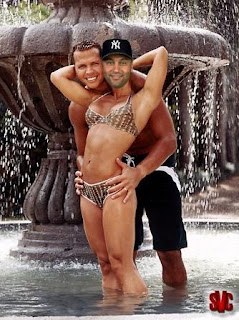 As the famous country song goes “No one knows what goes on behind closed doors”.

How do these people make their social schedule? Between movies,photo shoots for the magazines, TV talk-shows, writing volumn 4 of their biographies, visiting their families, mom & pop, little sis& bro, signing photos or baseballs? I know the baseball players do lots of time visiting in hospitals from bed to bed, doing fund raising dinners.¬†¬† So how does Jessica Beil get a date for¬† tonights¬† red-carpet¬† “Walking-the Dog”?¬† Simple. She calls her Social Subscription Hotline, where they pay $32,000 a month to get set up with Mr.Right. “Hello, this is number #426. I’m in the mood for a sportsman tonight, no, no NFL Football players, how about hockey or baseball, I would prefer he’s white, but if you get Derek Jeter than 50% Caucasian is fine….”

My biggest worry is running out of charcoal or shisha for the hookah.